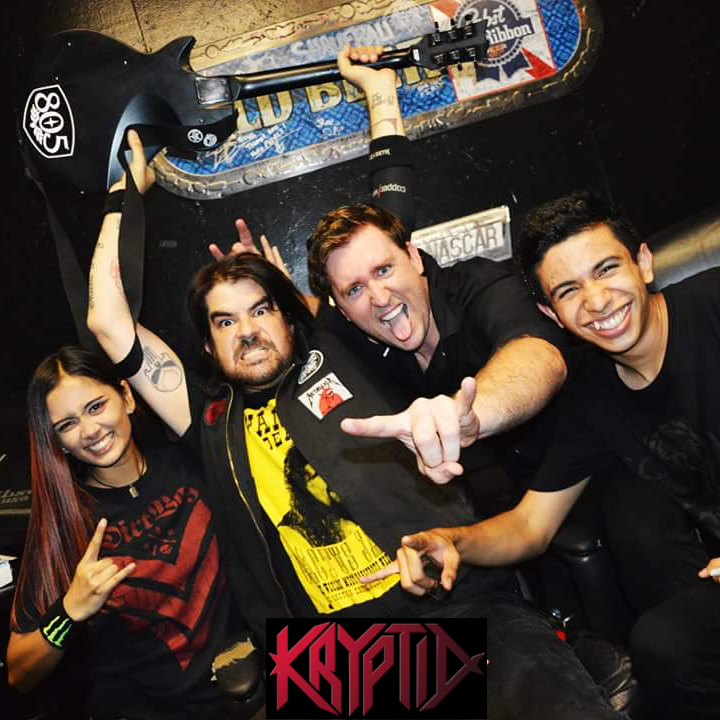 Kryptid’s roots reach back to 2013 when it was founded by students at a local San Diego music school, where it served as the rock/metal section of the band program.

In early 2015, then 14-year-old guitarist, Keona, having outgrown the school, collaborated with fellow 13-year-old drummer, Shantanu, to push the alternative metal band, Kryptid, to the next level. Each was looking for an outlet to pursue their passions for their respective instruments and wanted to be more than just a school band. Recruiting a fellow bassist and a singer from the same school to round out the lineup, they focused on honing their chops performing covers of bands like Metallica, Rush, Godsmack, Volbeat, and Pantera.

This led to a collaboration in 2016 with guitarist JP Cervoni of the 80’s hair-metal band Nova Rex in the producer’s chair to record a new rendition of the Ozzy Osbourne classic “Over The Mountain” at Clearlake Studios in North Hollywood, CA. Later that year, the band spent time with legendary drummer Alvin Taylor to learn performance and songwriting techniques. Band activity was sporadic during 2017 as school studies took precedence over band activities.

Fast-forward to 2018, when seasoned musicians Rafael and Lucho joined the band to fill the now-vacant lead vocalist/guitarist and bassist roles respectively, and the new lineup made their debut at the world famous Whisky-a-Go-Go in L.A.’s fabled Sunset Strip. With their repertoire newly expanded with original material, they have formed a residency at Jacked Up Brewery in Escondido, California. Kryptid is currently working on material to compile their debut album as Keona and Shantanu simultaneously pursue their paths in college.